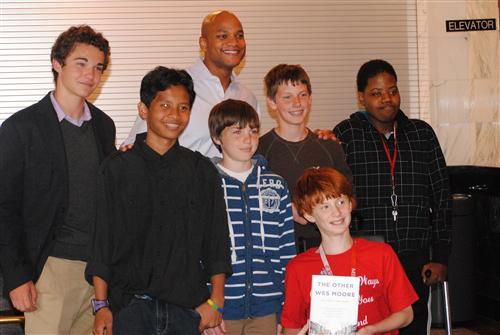 The Other Wes Moore

With funding made available through a $9,000 grant from the Williamsport-Lycoming Community Fund at the First Community Foundation Partnership of Pennsylvania, the Williamsport Area School District Education Foundation coordinated a visit by New York Times best-selling author Wes Moore for a collaborative, multi-organizational and culminating event.

Moore, author of The Other Wes Moore: One Name, Two Fates, spoke to area students about personal responsibility, the practice of good decision making and the power of education at the Community Arts Center in May 2012.

The author's memoir was the basis for the program, which tells the tale of the inner-city destinies of two Baltimore men who carry the same name and similar histories amid the struggles of urban life, but whose journeys through adolescence and emergence into adulthood are startlingly different.

At 22, the author was declared and enjoying the value of becoming a Rhodes Scholar.  At roughly the same time, his counterpart was the suspect in a highly publicized manhunt and capture following the assassination of a jewelry store security guard, an off-duty police officer, during a robbery gone horribly wrong.

Today, that Wes Moore continues to serve a life sentence on a conviction of felony murder, while the author went on to make landmark accomplishments, such as becoming a White House Fellow, a decorated ware veteran and an NBC News contributor.  He's been featured in People and Time magazine, USA Today, and on MSNBC and Oprah.

"We invited the other Lycoming County school districts to attend the program," said WASDEF Executive Director Greg Hayes.  "Going into this, we knew our district and Loyalsock Township already were planning to teach the book at the secondary level.  So, we encouraged each of the districts to make the book available to the students they have coming before the event so that the program is more meaningful."

"Because the story is so powerful," Hayes said, "we wanted to reach the maximum number of students possible who are around the same age that both Wes Moores were when they made their most critical choices.  With the Community Arts Center agreeing to come on board the project, attaching it to its Educational Series and helping cover the student transportation costs, we had the opportunity to reach a couple thousand students."

In addition to the $9,000 grant, $2,500 of Educational Improvement Tax Credit (EITC) funds from FCFP also were put toward Moore's visit.

"The First Community Foundation Partnership of Pennsylvania is proud to support an event the facilitates collaboration among our Lycoming County school districts for the benefit of students in our community," said FCFP CEO Jennifer Wilson.

"The Community Foundation encourages partnerships, which is a primary consideration in our unrestricted granting process," Wilson added. "It is exciting to see a project such as this become a reality because of support from several funds at the FCFP, including our EITC fund, Tree House Fund and the Williamsport-Lycoming Community funds."

Moore's book has received enormous critical acclaim since its publication in 2010, getting the attention from those such as Dr. Ben Carson, who visited the city in 2009.  Carson also penned the autobiography Gifted Hands.

In his review, Carson calls Moore's memoir "a compelling story that gets to the heart of the matter on faith, education, the hard facts of incarceration, and the choices and challenges we all face in our lives. It's educational and inspiring."

"We were truly delighted to join the growing list of community institutions and individuals that are not only supporting these educational initiatives with financial support," Steele said, "but rolling up their sleeves and working to assure that our students are exposed to a wide variety of perspectives."